It is safe to say that the culinary and hospitality fields are booming. And this boom is not without struggle. Culturally, it has always been a challenge to convince parents to allow their children to enter the hospitality field, let alone the culinary one — I can say this from personal experience.

However, the advancement of career fields and expansions of the food and restaurant scene in Amman has created many opportunities for those seeking a career in the food and beverages sector. This week I went to one of the pop-up restaurants, which is open approximately four months out of the year, called The Top Restaurant.

The Top is a restaurant inside the Royal Academy of Culinary Arts. It is part of their program where students plan for the operations, create a menu, work as a team, and open the restaurant for the public. Each group is given two weeks, then the menu rotates, and so does the team that operates it.

Luckily, the menu changes every two weeks, meaning more variety. Also, since it is part of the culinary arts academy, the highest standards are expected regarding food, hygiene, and service.

I was very excited to know that they opened up for this season and made my way to check out their menu, to both review and shed light on the new kind of restaurants, and to support the upcoming chefs of the future. For this group of students, the common theme was international dishes influenced by Arab flavors, an interesting twist to the norm. The prices were reasonable as it is a nonprofit organization, mainly covering the cost of the food. Who would say no to a four-course dinner for just JD15?

The menu has a variety of cold and hot appetizers, main dishes, and desserts, with various options to serve every taste and dietary need, which can be a challenge in some restaurants nowadays.


Luckily, the menu changes every two weeks, meaning more variety. Also, since it is part of the culinary arts academy, the highest standards are expected regarding food, hygiene, and service.

The cold appetizers were vine leaves halloumi salad; the vine leaves were stuffed with halloumi cheese, grilled and served on top of tomatoes, and drizzled with molasses. The balance of flavors in this dish made a great appetizer.

The zucchini rose was a muttabal made out of zucchini instead of eggplants and served with a creamy walnut tahini paste.

The hot appetizers varied from a broad bean soup that was light in flavor if you are looking for something that is not too filling. A twist on the traditional fatayer with muhammara and potato haliva was offered, reminding me of a canape-style dish you would not want to stop munching on. Proteins, including lamb chops, chicken, seabream, and a vegan dish were all available on the menu. The lamb chops, served with beetroot hummus and chimichurri, were perfectly cooked to medium and the flavors complemented each other. Every single element of the dish was well thought out.

Bringing sweetness to a well-known, traditional Arab dish was the chicken with maftoul, which was served with a twist of Qamar Al-Din and roasted squash.

Even beyond those, the highlight for me was the stacked fatteh, which is layers of fried eggplants, ground beef, tomato sauce, and creamy yogurt tahini sauce. The dish was served in a way that indicates it was well-thought-out to grab your attention. If you have ever had a fatteh, you would know that the bread component gets soggy after a while — and it is not very pleasant to eat. However, this dish was prepared at the tableside to ensure that the crispiness remains for a longer period of time. The second highlight was the sea bream, served with artichoke puree and homemade olives, sundried tomatoes, and thyme gremolata. The fish was cooked beautifully with crispy skin, and all the elements delivered successfully; this was definitely one of my favorite dishes on the menu.

The desserts consisted of an Ogeli Ice cream, which is inspired by the Kuwaiti dessert of saffron ice cream over a cardamom-flavored cake, a vanilla mousse with a pistachio filling, and homemade Baklava ice cream.

In general, the desserts were very interesting in taste and all offered a modern twist. However, I would have loved to see a little more variety. Personally, I would recommend having a chocolate option on the menu as well instead of sticking to simpler choices.

The overall value for money was achieved since the main purpose of this restaurant is to give the students a chance and the space to create, operate, and cook for guests and to get real-life experience before going into the industry.

I definitely recommend going to The Top Restaurant to support and try out the dishes.

The restaurant will operate until the end of July. 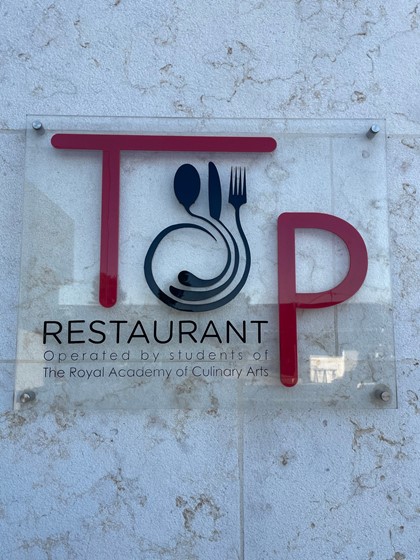 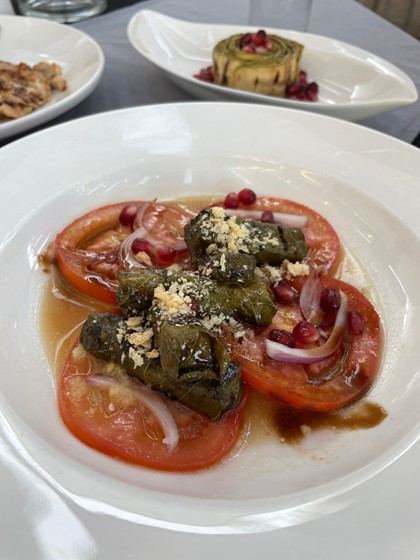 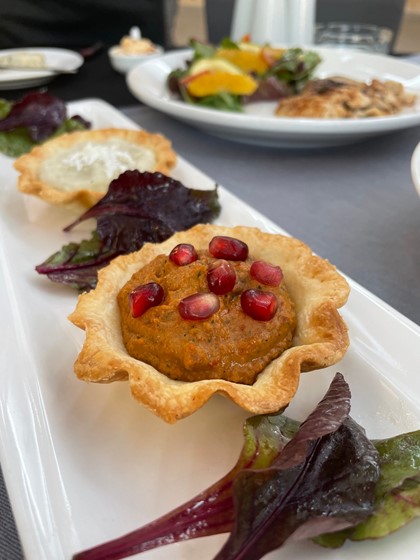 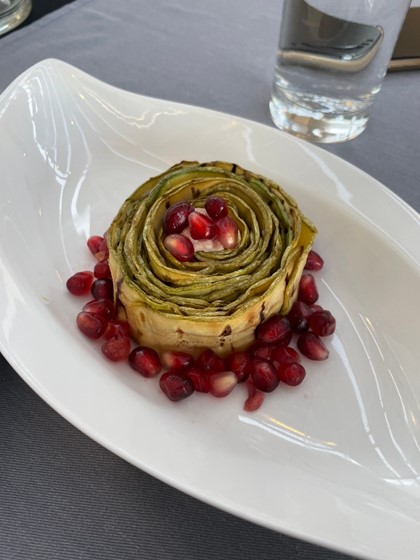 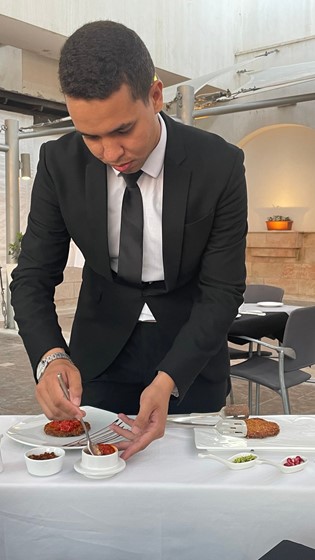 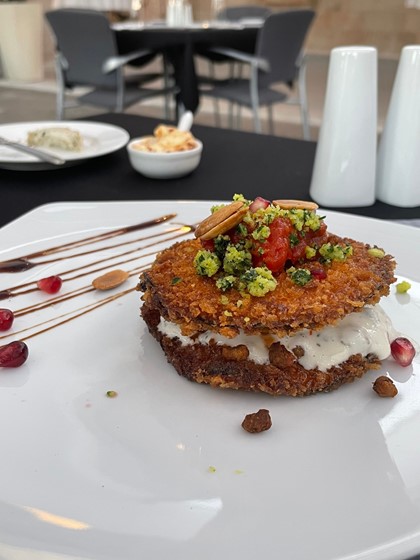 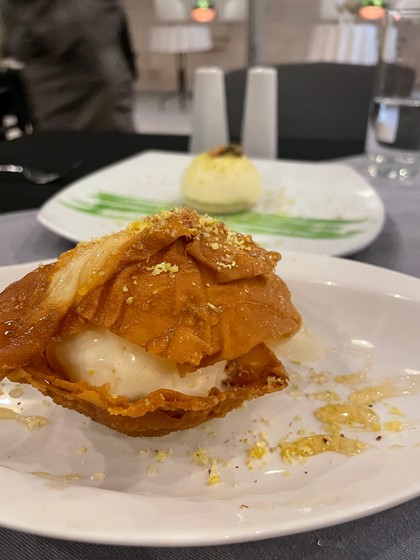 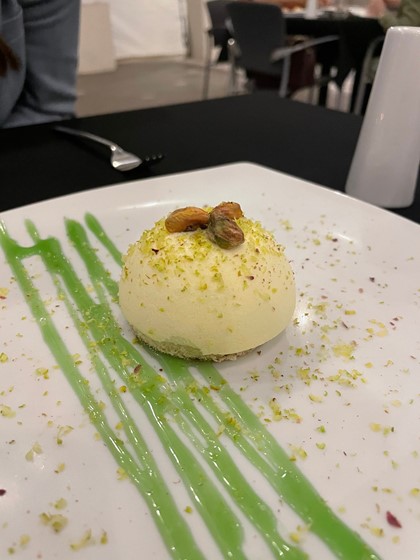 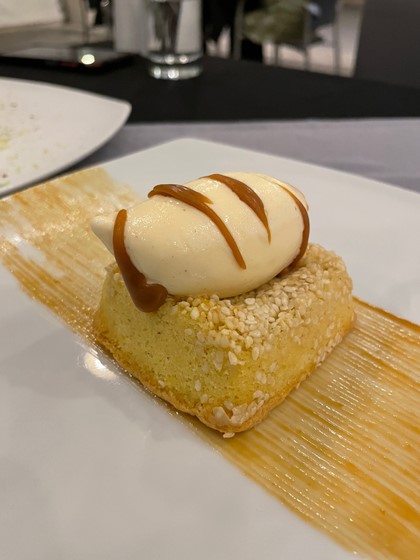